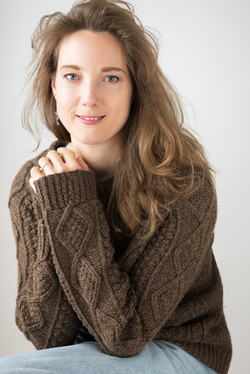 We are not alone in our experiences with wild weather! On October 16 temperatures reached 89F*, and toxic smoke from wildfires continued to worsen throughout that week. It was the longest stretch of hot dry weather on record for the Pacific Northwest - I've never harvested zucchinis in mid-October in my life! A week later a switch was flipped, temperatures dropped by 30 degrees, and blessed rain finally arrived. It's almost like we jumped from summer to early winter! Good knitting weather at last.

Peace Fleece production is resuming, and knitting kits for my Aran sweaters, scarves, and hats will be available for holiday shopping. This wonderful yarn is made with wool and mohair produced by indigenous Navajo ranchers, and the vibrant colors work perfectly with my cabled Aran designs. Limited availability might restrict sales to local in-person venues only; I will post updates on my Facebook page.

This is an authentic cottage industry, a home-based small-scale manufacturing business drawing on skills handed down for generations.  "Beannaigh" is an Irish word (pronounced BAN-nah), meaning to bless, to honor, or to salute.  Handknitting was originally a way for poor women and girls to earn the only extra cash they would see for the year; one elderly woman from the Yorkshire Dales said that as a child, doing some extra knitting "kept the wolf from the door".  Another from Ireland referred to her knitting needles as the "four crowbars of poverty".

These are powerful stories for me.  When they weren't gutting and packing fish, hauling loads of peat for the fire, and growing their only food themselves, these women knitted.  They spent endless hours of winter darkness working by the light of a single candle, if they could afford one, or huddled close to the fire if they couldn't.  In spite of their hardships, they created incredibly beautiful patterns and designs that in some cases have remained popular for more than 200 years.

I preserve and pass along the stories of these women with my sweaters, knitting patterns, and classes.  The village fishing life of the British Isles has largely disappeared in favor of tourism and larger industries, and their traditional handcrafts have become mere hobby.  Thanks to a few dedicated researchers many centuries-old sweater patterns have been recorded, along with the stories of the fishing villages in which they originated and the women who knitted them.  Books by Michael Pearson, Mary Wright, Gladys Thompson, and others are still in print and can be found at local bookstores and libraries - take a look at them to learn more!