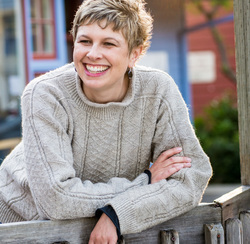 A "fisher gansey" is a traditional workman's sweater found around the coasts of England and Scotland.  There are some differences in various researchers' definitions of a gansey.  In general, you will read that the word derived from "Guernsey", one of the Channel Islands where handknitting was an important industry starting in the 16th century.  You will also read references to "jerseys", named for the other main Channel Island.


Ganseys are finely knitted (7 - 8 stitches per inch) with 5-ply worsted-spun wool.  The region of Yorkshire in England has been, and still is, an important center of production of this yarn for at least 300 years!


Ganseys are seamless in construction, knitted in the round from the bottom up, with the shoulders knitted together and the arms knitted on from the shoulder down.  There is a diamond-shaped gusset in the underarm, creating freedom of movement and eliminating the wear and tear that often results in the seams of garments that are knitted in pieces and sewn together.


Each village or region had its signature gansey pattern, and individual families would often have their own variations.  Traveling fishermen would often know each other's home region by their ganseys.  In some accounts, a woman might only knit one pattern in her life, passing it down orally to the next generation.


The gansey shown here is my own design, in a style typical of the north coast of Scotland and northeast England.  It is fully patterned with vertical panels, and features a perpendicular Scottish shoulder strap.  Many of the more elaborately patterned ganseys include cables, resembling ropes, and for this one I chose tiny 2-stitch mini cables.


Many ganseys were quite plain, beautiful in their simplicity.  Simple knit and purl stitches create seed or moss patterns, which when interspersed with horizontal garter stitch bars can be striking.  These plain working ganseys often had sections of plain knitting (stocking stitch, or "stockinette") at the lower body and arms, making it easy to re-knit worn sections. 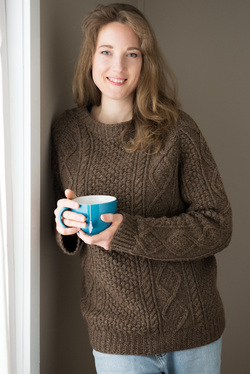 The beautifully patterned sweaters associated with the Aran Islands off the west coast of Ireland were my inspiration for creating this handknitting business.  The one I am wearing here was made by hand in Ireland, then sent to New Zealand where my mother-in-law, Carol Connolly, bought it in the 1970s.


Many have heard the stories of "clan patterns" or family patterns, unique designs associated with particular Irish families and used for the identification of drowned sailors.  One of my favorite designers, Alice Starmore, wrote what I think is the most accurate and well-researched account of the origins of Aran sweaters in her book Aran Knitting.  She does a very kind and gentle job of debunking this myth, and describes the more likely beginning of Aran knitting in the early 20th century.  I can't do the history justice, so please pick up a copy of her book to learn more!


It is true, however, that there is now a strong tradition of family or clan patterns - I consider my sweater to be "Mrs. Connolly's pattern" because she has such fond memories of when she bought it for her son, my future husband.


As Ms. Starmore recounts, elaborately cabled fisher ganseys were likely first knitted in Ireland as they were in Scotland, in the round and with a fine gauge.  Some incredibly clever woman from the Aran Islands started to get very creative with her cables, and in the friendly competitive tradition of the knitters others likely started to copy her patterns and elaborate on their own.


Aran knitting patterns today are written to be knitted in pieces and then sewn together.  Many designers claim that the work is simply too heavy and cumbersome to knit in the round - but I disagree!  My Arans are knitted just as my ganseys are, in the round with underarm gussets, with beautiful perpendicular saddle shoulders.  There are no seams to come apart with wear (as my own sweater is!) and the cuffs are very easy to replace as they begin to fray.  I offer classes in knitting Aran sweaters traditionally, in the round, twice each year. 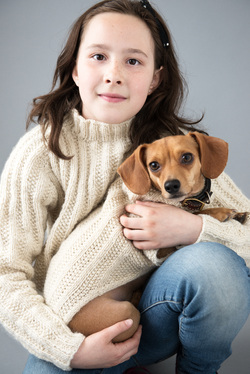 In addition to authentic reproductions of documented fisher ganseys, I love to create custom designs for individuals, couples, and families.  One of my favorite "his & hers" projects are making matching sweaters for people and their dogs.  I have made copies of favorite worn-out sweaters, complete family sets in true Aran tradition, matching sets for wedding and anniversary gifts, and for one child reproduced his sweater three times as he grew out of it.


All the sweaters I sell at my farmers' market stall can be made in nearly any size. Although my focus is on authentic historical reproductions and the publication of knitting patterns, I will always bring along some of my perennial favorites in the form of mini sample sweaters.  These mini sweaters are sized for 18" dolls, such as American Girl dolls, and I often end up making matching sweaters for girls and their dolls!  Matching girl and doll outfits are extremely popular, as you can see if you visit an American Girl store, and I've had a lot of fun coming up with new designs.  Please visit my Gallery to see many more original designs!